The Australian couple told us that when they had been here 10 years ago they had also visited a museum for world peace in the Ritsumeikan University. This was only two bus stops down the road so we decided to go there, they came along too.

The museum has moved to a new building and seems to have been extended quite a bit. With the aid of audio guides we went round it and were also given a booklet about it all. First it describes how Japan became very militarised and everyone had to work for the war effort. The first part of the war was the invasion of China and colonisation of most of south-east Asia including Burma. It was very explicit about the atrocities committed by the invading troops.

Then it went on to the bombing of Pearl Harbour and the resulting war with USA and allies. Again the hardships caused to the population and the prisoners of war were explained. This of course led up to the wide-spread bombing of the Japanese towns – Kyoto was not so badly affected as it seems that it was one place singled out for the possibility of a nuclear attack.

The exhibition then describes how the Korean war 1950-1953 led to the first build-up of a Japanese military again although Japan has declared in its constitution that war is no means of solving conflicts. Finally further wars since 1950 until the present day in all parts of the world are referred to.  Two storeys up there is then an exhibition about how peace can be preserved. It was all very interesting and we must have spent at least 90 minutes there. 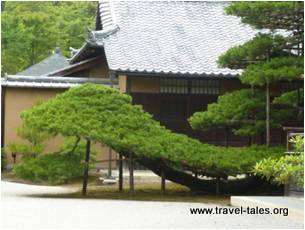