After breakfast we set out to see more of Kyoto. We bought day tickets for the buses and then managed to get on the wrong bus so we had a view of the non-tourist area of the town before returning to the station and going on to the Golden Pavilion or Kinkakuji.

On the bus we spoke to an Australian couple who asked if we were going there too, they wanted our ‘help’ to get off at the right stop so we warned them about our mistake. Anyway we got to Kinkakuji successfully and went around on the marked route. There were plenty of others doing the same.

The pavilion is a shrine containing relics of Buddha in the Shkokuji School of the Rinzal sect. Originally it was the site of a villa owned by the statesman Saionji Kintsune. After he died in accordance with his will the villa was converted into a temple. 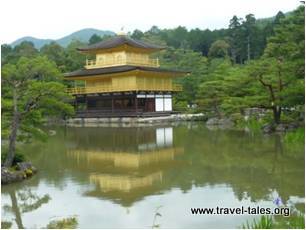 The public may not enter the pavilion the two upper floors of which are completely covered in gold leaf on the outside, maybe on the inside too. The picture of the inside of the top floor shows the walls completely gold and the floor shining so much that the walls are reflected – or it could be water. 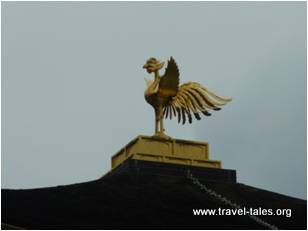