When we got down Wun Bin took us to the Guilin Tea Science and Research Institute with its tea plantation. Originally it was the royal tea garden in the Ming Dynasty – 400 years ago. There it was raining again and we were given typical Chinese cone shaped hats to wear while we looked at the tea bushes and the guide there showed us about the different leaves and how they became different grades of tea. 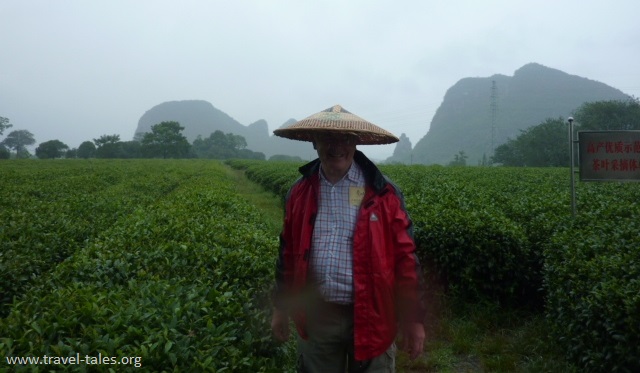 We then went inside and were again shown the tea ceremony but only given three different ones before going on to the shop. Again we bought some!! 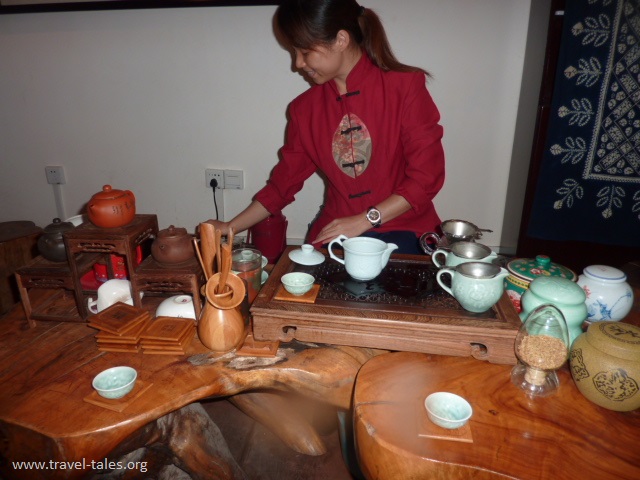 Then at 20.00 Wun Bin collected us again and took us to the ‘Six horse Warf’. There were 6 prancing bronze horses there. We then got onto a boat and went for a cruise with bushes on the banks lit up. At first it seemed a bit boring – there was a long description in Chinese from a guide but it did not help us much. Then we went into a ‘lock’ which turned out to be a tank that was raised up with all the water and two boats. From there we went round a corner and there were two stages with performers – one was just finishing when we arrived but we were able to see the other one.

From here the cruise was much more interesting as there were lots of buildings and pergolas lit up and it all looked most attractive. There was even a marble boat which reminded us of the one at the summer palace in Beijing.