If you have never been to a Rodeo, then a visit to the Houston Livestock Show and Rodeo is a gentle introduction for ‘townies’ into the world of what I’m going to call ranchers.  The event allocates significant space to product sales and has a carnival on site, so if watching people perform their daily ranch responsibilities in an arena doesn’t fill you with a high level of excitement, there are other activities to keep you amused.  In fact many Houstonians go for the carnival and rock concerts rather than the horse trials and cattle, swine and sheep showing.

The whole event is spread over three weeks in the spring of each year, taking over Reliant Park home to the Houston Texan’s NFL team the remainder of the year.  At the centre of Reliant Park is the now condemned Astrodome, in its time a marvel of engineering which has now unfortunately fallen into disrepair.  The costs of repairing or demolishing were sufficiently high that when the site around it was redeveloped for opening in 2002, it was left standing in the centre, usually locked and inaccessible.

The redevelopment took the needs of the rodeo into account in its design specifications.  This means that the show hall was designed with stalls beside the rear doors in which to wash down cattle for shows – not something I ever saw at any of the London or Frankfurt trade-show venues I have visited.  Following the wash-down in the stalls, owners were blow-drying the coats of their cattle to present them at their absolute best for the livestock show at the back of the exhibition hall.

At the front of the  hall vendors, selling Stetsons (with or without rhinestone adornments), belts and other leather goods, Western-wear clothes, horse-boxes with human living accommodation included (or Toyhauler RVs for horses rather than motorcycles), jewellery, wooden and metal crafted signs, flagpoles, ropes and furniture have their stands.  There is also a petting zoo and a range of agricultural educational stands aimed at children, where they could meet Elsie the Borden cow or see a hive of bees making honey.

The most seasonal section is the birthing centre, where a number of sows, ewes and cows are staying for the duration, have already given birth, others are due to have their piglets, lambs or calves throughout the Livestock Show.  Representatives of specific cattle, goat and swine breeds are also on show for the visitors less familiar with livestock than those taking part in the show.  They have descriptions of their heritage and what they were now predominantly farmed for in the southern United States, although I just took pictures of the animals…

Having toured the show hall we crossed the carnival of rides and cotton candy stalls outside to the Reliant Arena, which feels as if it were designed for Rodeo competition events.  Although it was not clear when I looked around, I expect that building can be used for other sporting events which do not pull large crowds, such as gymnastic competitions or school basketball.  While I was resting my feet, I watched the amateur team ‘heeling’ competition.  A team of two riders enters the area behind a just released calf, the ‘header’ swings his (or her) lasso to catch the head of the calf after which the ‘heeler’ swings his (or her) rope to catch the hind legs of the calf.  This is all timed, and penalty time is added for only catching one hind leg, although there is more leniency around what the header rope needs to be wrapped around.

Not all the teams were able to catch both ends of their calves, some did not even manage to ‘head’ it demonstrating just what skill and practice it requires to be able to control the horse you are riding to follow the calf at the right distance and swing your rope at the right time into the right place to catch the errant calf.

The evening events are hosted in the Reliant Stadium, designed to accommodate the Texans, the Rodeo and music concerts (although only two of those three on any one day).  On the day I went, I watched the transformation of the stadium from its use for professional Rodeo competition to its musical use while the roadies were setting up the stage for Styx.

Team Roping is the heading and heeling event I had watched amateurs compete in earlier in the day, whereas Roping is an individual event in which the rider carries a shorter rope in his (they were all men) mouth, races after the calf, ‘heads’ it, then come off his horse to catch the calf with his hands and arms, lifts it on its side and ties two hooves together with the shorter rope he had in his mouth.  The longer rope is attached to the horse and the teams of horse and rider clearly worked together, the horse holding tension on the rope by moving backwards and sometimes even dragging the calf along the ground once it had been tied.  Steer wrestling is a further iteration on this where the rider does not have the first rope and needs to come off his horse at the right time to fall onto the calf to be able to wrestle it to the ground and tie its hooves.

Barrel Racing is an all female horse racing timed event where three barrels need to be circumnavigated in a set order and direction in the shortest time.  Chuck Wagons are pulled by teams of four horses; three wagons race against each other around the arena in any one race.

The calf scramble is the start of a year-long project for young farmers.  Individuals between the ages of 14 and 18 can take part and come into the arena.  A number of breeders donate calves to the event, which are also released into the arena.  The children need to catch themselves a calf and put a roped bridle on it.  After the event, they then get to take that calf to their farm and raise it for the remainder of the year.  They need to submit monthly reports and then show the one-year-old at the Livestock show the following year.  Usually there are only about a third as many calves as children, so not everyone who enters gets to take a calf home to raise. 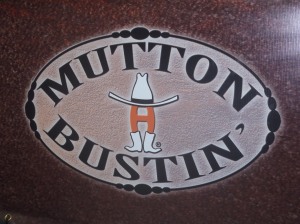 Mutton Bustin’ is another junior event, this time five and six year-olds wearing helmets and protective vests are put on the backs of adult sheep and need to hold on for as long as possible while the sheep runs to the far end of the arena (not the full arena, a smaller gated off area!).  Most fall off pretty much straight away, the winner the night I watched managed to stay on all the way across until the sheep found the rest of its herd.  A well deserved belt-buckle for the competitor!

The carnival section is like many others, with roller-coasters, mirror houses, and other rides.  The food is also familiar to most locals, I had not encountered Funnelcake or smoked turkey leg before, so I tried them.  I stayed away from the ‘chicken fried bacon’ and the deep fried Oreos.   I was very tempted by the deep fried red velvet cake, but fortunately for my hips, the queue was too long so I skipped that too.  A great day out with the smell of horses, cows, saw-dust and hay intermingled with that of candy-floss and barbecue…