The temple which has this remarkable garden is the Kamakura Hasedera Temple. It was built by a monk in 721 AD.  He had made a carving from part of the trunk of a camphor tree he had found in the Nara district and thrown into the sea near to where Osaka is today to find out where he should build his temple.  It washed up on the shore 15 years later at Nagai Beach near Kamakura sending out rays of light.

Inside the temple is the larger of two statues he commissioned to be carved into the eleven-headed Kannon. It is now covered in gold leaf (done in 1342) and stands in the temple, the other is near Nara. The statue is 9.18 m tall and each of the 11 faces has a different expression to signify that the deity listens to the wishes of all types of people. In 1392 the halo was added. This deity is described at the ‘Buddhist Goddess of Mercy’ but is actually without gender. No photography of this golden statue is allowed but in the internet I found this one, it just does not give the impression of the side of the statue. 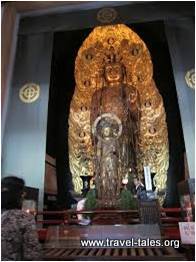 There is also a hall for Daikoku-do. He is a joyful god of good fortune – there are 7 Japanese such gods. He is considered the god of wealth – or more specifically the harvest. He has a wide face and beaming smile and as he is often portrayed holding a golden mallet and standing on bales of rice. 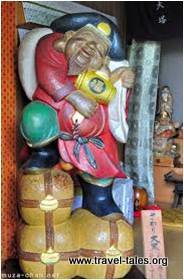