Then we set out for the Nakanoshima Park and had a bit of a walk from the station we got out at to the park, but not too far. On the way we saw two flowering trees with large bunches of red flowers on them, really beautiful flowers but we have no idea what the trees are.

The Nakanoshima Park looked very pleasant, well laid out and clean and cared for like everything in Japan, but no flowers – the first flush were over and we could see where the dead heads had been cut off.  One single rose remained: 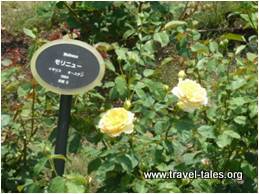 We got to the ceramics museum which turned out to be a modern building opposite the Osaka public hall a turn of the last century brick building.

The displays were very interesting. There are a lot of items from Korea from the 12th century when they had perfected a technique of incising the clay and inserting a different colour clay – sometimes two different colours – and then glazing with a blue/grey glaze, referred to as ‘Kingfisher’.  There work was very fine and detailed, other items had been modelled to give a relief pattern. This work was referred to as celadon.

Items from later dates, whether from Korea, China or Japan did not show this kind of detail at all and in comparison many of them seemed quite crude.