We arrived at the station 2 minutes before a train for Osaka was leaving so we jumped in. Before we had settled our luggage the ticket collector was there to see our tickets. We were on an express train and had to pay the surcharge – only about 6€, but it had to be paid so purses out etc.

The journey took only 25 minutes and there we were in the middle of Osaka. We were able to get the JR loop train to the station which seemed according to Google to be the nearest to the hotel and then had to do a fare adjustment as that bit was not included in our original tickets. Anyway we were out and all in less than an hour from leaving our hotel in Kyoto.

The walk to the hotel then proved to take quite a while – not quite another hour.  Anyway there we could leave our luggage and found that we were next door to the castle.

So off we went and visited the castle and got a good view all round. While enjoying an ice-cream there we found we were just beside the ‘photo spot’ a bride and bridegroom together with bride’s Mum turned up with the photographers for a photo shoot. 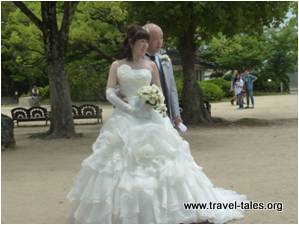 Later from the top floor or the castle we saw them going into the neighbouring building which was described as the past municipal museum so we assume the registry office is now there. 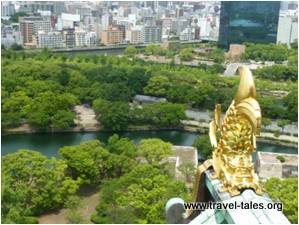