I haven’t been travelling much myself, however my parents have been on a number of great trips since I told you about their tour of China.  Over the coming weeks I’ll share their trip to Japan with you.

We left Frankfurt on Tuesday on a direct flight to Tokyo.  Everything went according to plan and we arrived in Hanaida airport in time on Wednesday.  There we got an airport bus directly to hour hotel.  25 floors and 70 rooms per floor!  We had a room on floor 13, it is 2m wide with a bed against the outside wall where there is a mini window – so Japanese style we have to learn ho to live in a small space.

After settling in we took a train and an underground to Oshiage where the Sky Tree – a broadcasting tower only 2 years old with two viewing platforms – stands.  The tower is 634m high and is the highest broadcasting tower and the second highest building the in the world. 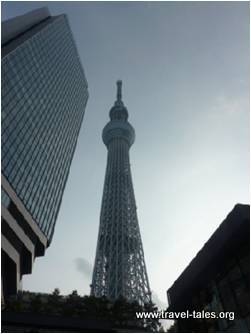 There should be a view of Mount Fuji, but the smog and poor visibility blocked it.  However we could see a lot of Tokyo and it was very interesting.  There was also a reproduction of an aerial painting of the area from 1806.  Even then the population was over one million people!