Travellers on the London Underground will have encountered the tube station ‘KingsCrossStPancras’.  Above ground, there are two stations directly next to each other.  St Pancras, now serving Lille, Brussels and Paris and Kings Cross from which trains go to domestic and imaginary destinations.  I took these two pictures from the same spot, just facing North West and then North East.

The Kings Cross are of London takes its name from a monument to King George IVs which was demolished in 1845.  The station first opened in 1852; its design by Lewis Cubbitt was based on the Moscow Riding academy.  Its front brickwork reflects the two arched railway sheds behind it, now home to platforms 1 – 8.  Walking from one station to the other above ground includes these steps down from St Pancras and crossing St Pancras road onto King Cross Square, an open space with seating and trees in front of the terminus for trains to Hertfordshire and Cambridgeshire and the East Coast in general. 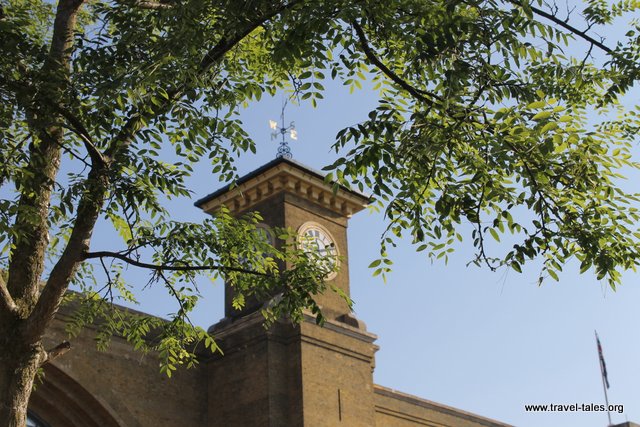 In 2010, another platform was added to the east of platform 1.  I think Kings Cross is the only station to have a platform 0.

In 2012 a westerly extension was opened, once again featuring a spectacular roof reflecting the advances in engineering since the original Victorian arched roofs of many of London’s stations. 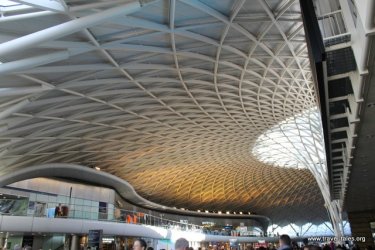 The most famous platform at Kings Cross these days is probably platform 9 3/4 which is used by the Hogwart’s Express to transport young wizards to wizarding school.  Even at 9 am, there was a queue to a picture taken with the luggage trolley disappearing into the wall between platforms 9 and 10.