The Shaanxi History Museum in Xian, regarded as “the pearl of ancient dynasties and house of Chinese treasures”, gives a miniature overview of the thousands of years of Chinese history and the ancient cultures. It starts with primitive man and goes on to the Banpo village and on through the different dynasties. It was quite interesting but it was very crowded and it was not so easy to see all of the exhibits most of which were only described in Chinese. Still we were glad we had been there. The grand buildings imitate the architectural style of the Tang Dynasty with a two-storied central hall and four worship halls around it. The predominant colours of the halls are black, white and grey, which give the halls an atmosphere of solemnity and rustic charm.

Dragon made of glass baubles

Bauble dragon on a wall

In the evenings we went out to find places to eat and also take night photos of the gatehouses and the Bell and Drum Towers. Finding places to eat was not always so easy. The first evening we did not fully understand the system and having found somewhere on the 2nd floor of a small shopping centre we took about the first of what was offered. Later we realised that we could have had a much better choice. The second evening we went to another place which was on the 4th floor, having read and interpreted signs and trying out the lift! There we certainly felt we were the wrong age group but we pointed to some of the pictures and ordered beers and it worked well. The third night we went back to the shopping centre of the first evening and tried another place, again pointing to pictures – we got some food but it was less successful! 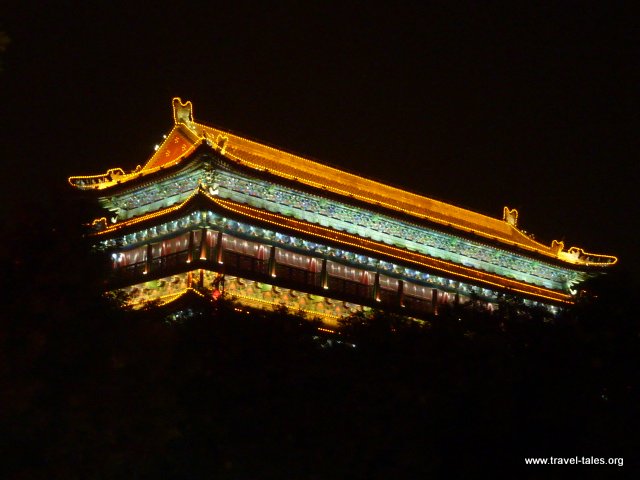 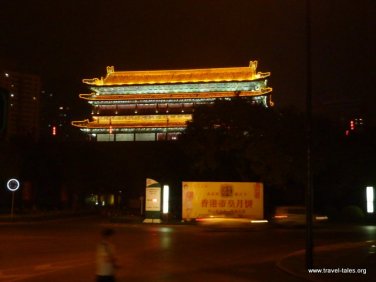 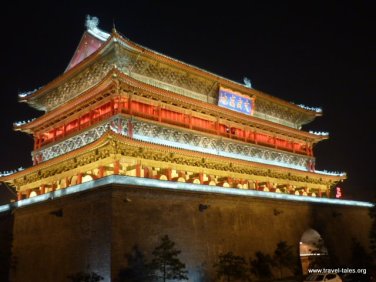