From there we drove about 30 minutes higher up into the hills to another village where we had lunch of Bamboo chicken and bamboo rice.   The chicken and rice were cooked inside bamboo which was then cracked open at the table.  It would have been wonderful if the chicken had been a bit more meaty and not just bones. The juice of the chicken stew was very good.

During our meal young woman and a child of about 1 year appeared. They were wife and son of the driver. After finishing our food we set out for the top of the mountain with them. Soon another young woman joined us and she showed us the path to take and said the driver would meet us in the car park at 3 p.m. That was fine, the path up was quite clear and up we went – it was mostly steps. In total it was over 1000 steps and we climbed 500 m. 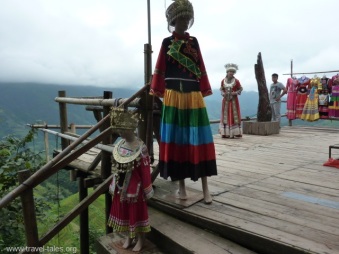 During the Yuan Dynasty (1279-1368), many minority groups were forced to flee to the mountains. Being primarily an agricultural society, they needed to find a way to continue agriculture on the steep sides of the mountains. They ingeniously turned the mountains into fields by creating the terraced fields. The entire mountains are covered with rice fields, from far below to the peaks, making Longji a very unique and picturesque scenic spot. From the top we had an excellent view of the terraced fields; all now bright green with the growing rice. In the spring when they are flooded (and we did not work out how the water gets up there for that) the pictures show a very picturesque scene. Some of the fields are tiny but others quite big. 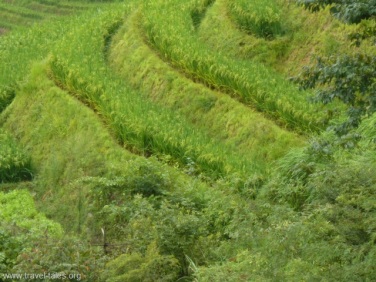 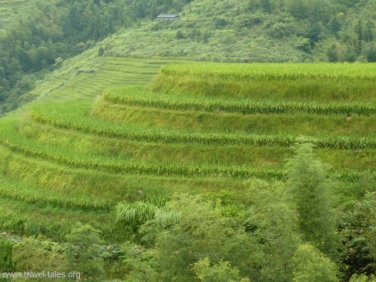 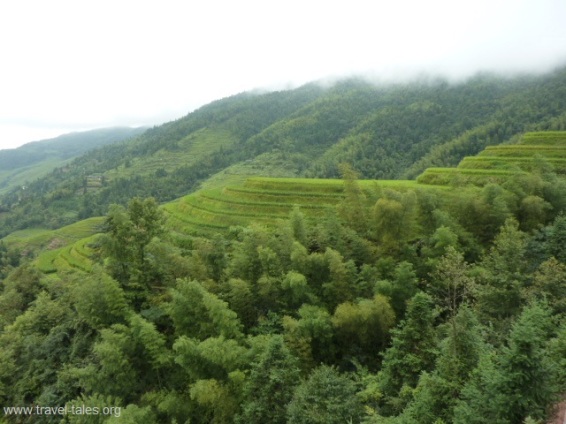