One of the more curious places in Houston to celebrate Halloween has to be the National Museum of Funeral History.  What started as a collection of hearses by a local funeral director has grown into a fascinating collection of vehicles, coffins and stories told by morticians and funeral directors.  I visited it in 2010 and apologise for the poor quality of the photographs, in those days cameras on phones weren’t quite what they are today. 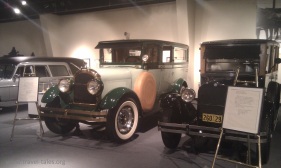 The most fascinating exhibit was ‘just’ a ring binder with 4 inches of sheets of paper in it.  On those sheets of paper was the full schedule of President Reagan’s funeral in 2004.  It lists who was sitting in which car, which order each car was leaving each location and at what time it was expected to pass certain landmarks on route.  For someone unfamiliar with the behind the scenes of state occasions I was amazed by the level of detailed planning.

This is not a museum that will keep you occupied for a whole day, however the exhibits on papal funerals and insight into Japanese traditions give insight into a cultural construct which is often difficult to ask questions about without appearing rude.