The Empire Builder train crossed the state line to North Dakota in the early evening, stopping in Williston to take on water and swapping passengers. There was one lonely cab waiting within sight of my window and despite his patience to pick up a fare none of the de-training passengers took him up on his offer. I wonder whether he meets this train every day and how often he manages to pick up a paying passenger. 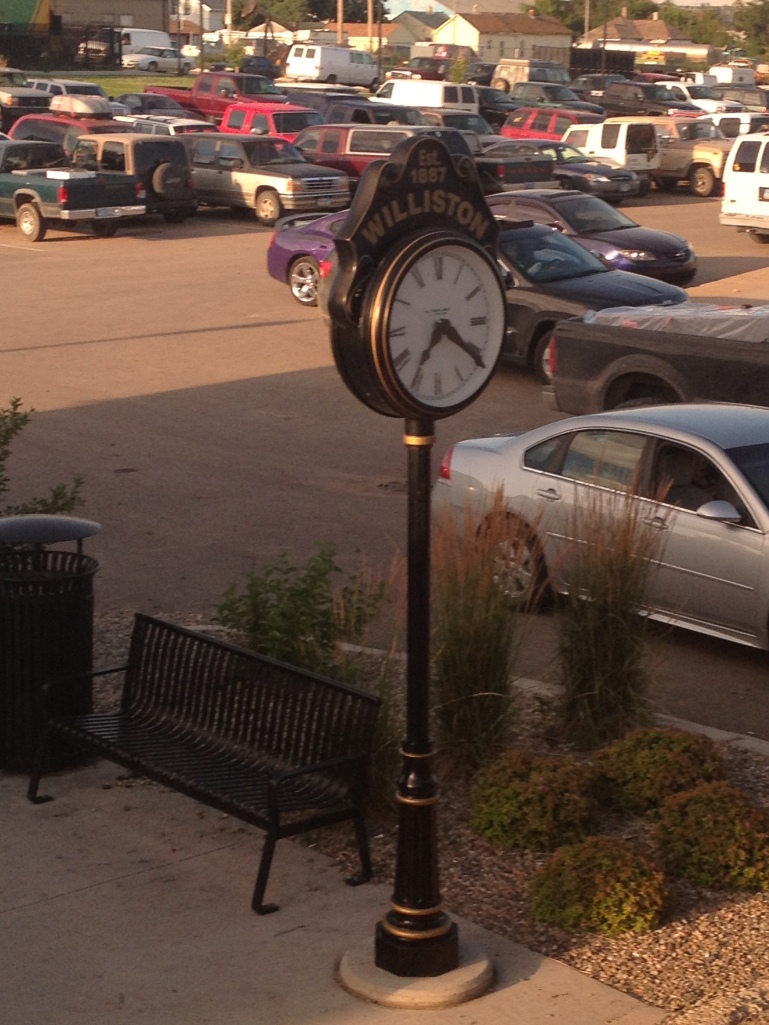 Northern North Dakota has slightly more industry than northern Montana, and recently there have been a number of oil finds in North Dakota. A number of the other passengers on my train were involved in the fracking industry, travelling to remote parts of this state. I was a little concerned when one of them passed his phone to the other to watch a video saying ‘you won’t see that anywhere else, that’s such-and-such exploding’.  I guess in all walks of life things that to those outside an area of expertise consider frightening or scandalous appear as a misfortune to be learned from to be avoided in future by those who understand what is actually going on.

As we proceeded across the state, we enjoyed another beautiful sunset

We arrived in Fargo not long after I had woken up and for the first time in more than a day I had mobile phone signal.  I checked in on facebook for the people following my journey ‘live’ explaining that the national data plan I have is not quite national when travelling through National Parks and fields of wheat skirting the Canadian border.

I had taken to checking our arrival times at stations against the schedule to judge how on time we were travelling. To my surprise, I found that at 6 am we were at the station we were meant to have left at 2:13 am. The delays had been caused by what in the UK is called ‘engineering works’ and what Amtrak calls  ‘steel work’.  It seems that in a number of places in North Dakota (and we were to encounter another in Minnesota), track work was under way which led to congestion between our passenger train and freight trains and the freight trains got priority.

The relationship between track and trains in the US is the inverse of the UK where the tracks are owned by a semi-nationalised entity, Railtrack, and leased to profit making train operating companies, one of which runs the freight operations.  In the US, Amtrak is the semi-nationalised passenger rail company which leases time on tracks owned by one of the rail freight companies, such as Union Pacific, Burlington Northern Santa Fe (BNSF), or Canadian Pacific.  There doesn’t seem to be the same  promise to passengers of being on time whereas there could well be contracts requiring on-time freight delivery.  This means that Amtrak trains often need to give way to freight trains when congestion arises. The passenger timetable does have some lee-way built into it so that some delays can be caught up, however not four hours worth.