I slept from San Antonio until Del Rio for about 170 miles.  Sunrise was scheduled for 6:36am and the dining car opens for breakfast at 6:30am so I set my alarm to wake me up in time to be able to watch the sunrise over breakfast.  When I sat down in my seat, dawn was starting to break

While enjoying my coffee and waiting for my breakfast to be cooked, the beginnings of sunrays were colouring the wisps of cloud

And slowly, as were we travelling west across the desert, the earth rotated making the sun wholly visible

By then it was actually already quite light and the vast expanse of the West Texas desert took up the whole of the window vista (no Microsoft jokes!).

And then, suddenly, the desert drops to reveal the Pecos river.

The bridge over the Pecos river currently in use was built in 1944 and is between 260 and 350 feet above the water level depending on the swell of the river.  This makes it one of the highest bridges over water in the US. 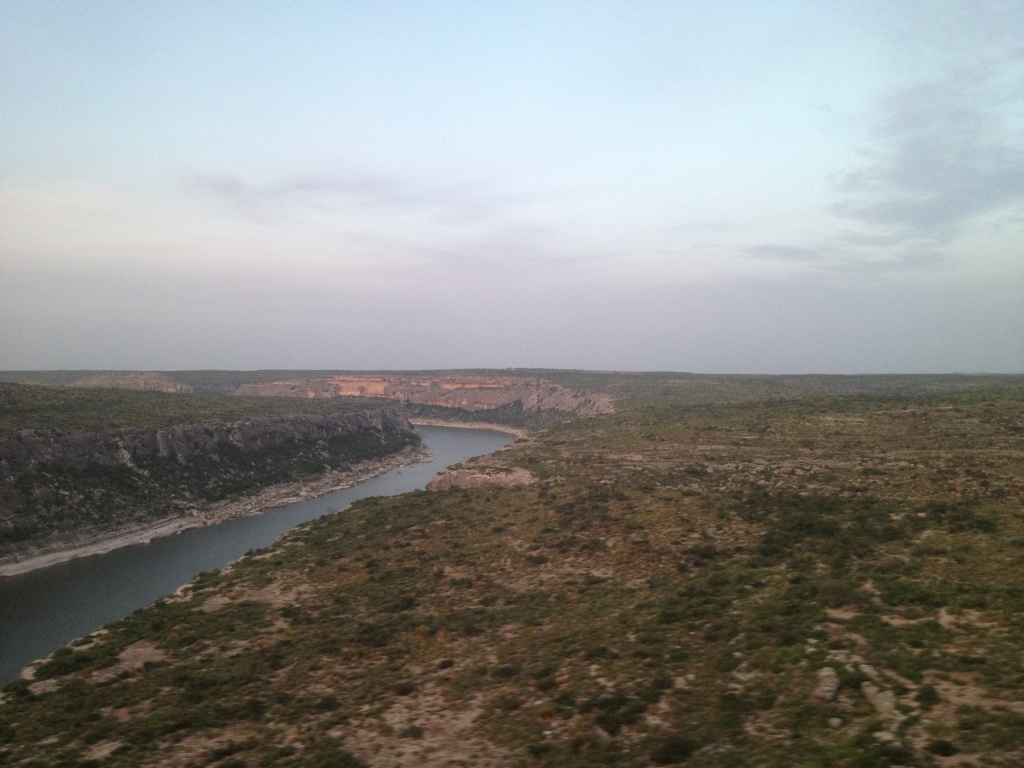 This year there has been a lot more rain in western Texas than is usual, giving the desert a far greener hue than would normally be the case in July.

The flora is predominantly prickly pear and rough scrubs brushes.  Many of the prickly pear plants were starting to flower with magenta or white buds sprouting from the tops of the cacti.  Unfortunately the train was travelling too fast (or my shutter speed was too slow) to take a picture on which that can be seen.  The more static and distant geological formation can be identified

Our mid-morning stop was in Alpine, TX, a city of about 6,000 inhabitants and home to the Sul Ross State University.  Much of the attraction of the university is its setting, being in West Texas but far enough from the Mexican border to be less affected by drug cartels than El Paso.

After Alpine, the desert yellowed out a little and I was not expecting the landscape to change much despite passing through the artist colony of Marfa. That teaches me to have expectations!  First I passed what must be a weather station.  Although the zeppelin shaped balloon was quite big, it was tethered in a fenced in enclosure with a single story building.

Then, completely unprepared for what would be on the front of the building, this whizzed by on my left.

You can’t really see in the picture, I was so surprised it took me a moment to get my camera out.  This building has two black awnings on them with the word ‘PRADA’ emblazoned on them in white.  What you would expect a Prada store to look like in New York, London or Milan.  And you can see from the picture, this building is miles from anywhere (although technically in Marfa), let alone a high fashion avenue.

It turns out this is one of the many pieces of art in Marfa. It is a sculpture which is meant to whither with age so that every time you come and visit the sculpture it looks a little different, older, less shiny and new, a little less High Fashion.  Prada donated shoes and bags to go on display and after the first set were stolen, there are now security cameras to guard the valuable contents from theft although not from the elements.

The next surprise was the pecan groves. 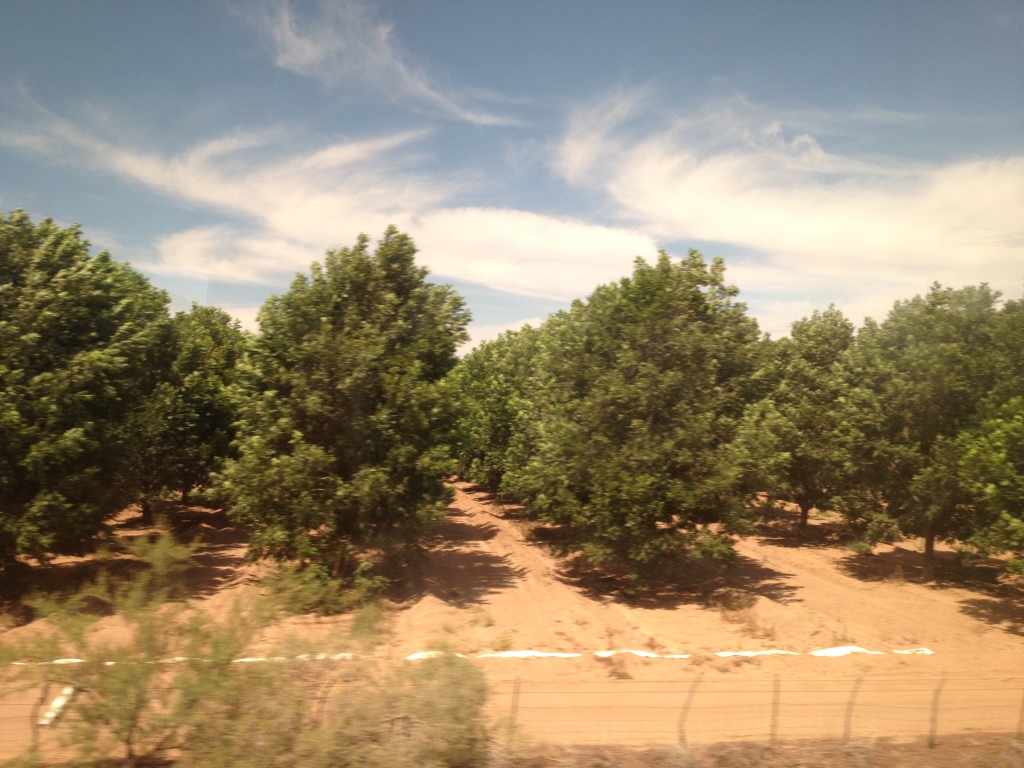 Suddenly, green trees in lovely neat rows sprung up out of the desert.  They are clearly irrigated although I’m not sure whether the water is pumped from underground or a nearby river.  As suddenly as they appeared, they disappeared again and we were back to travelling through the desert until we reached El Paso.