Our first Art for Fashion project was to interpret the work of a relatively modern artist (twentieth century onwards) onto a mannequin.  The objective is to show us as budding designers that fashion design can be inspired by anything and to get the creative juices flowing.  The worlds of Art and Fashion are closely connected, influencing each other and featuring in each other’s work on regular occasions.

We all started with a ‘naked’ mannequin which we made from oak-tag (the thick card used for patterns which need to be used over and over again to make clothes from):

The mannequin was then covered in paper mache to create the shape and form each of us needed to appropriately reflect our chosen artist.  The mannequin was then to be ‘dressed’ in the fashion inspired by the artist, the fashion did not need to be wearable though.  The design could be even more ‘high fashion’ than Paris catwalks, where models often wear things that just cannot be worn anywhere else.  Here are the unpainted paper mache models I made: 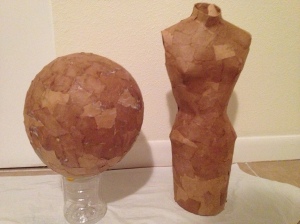 The artist I chose worked in many mediums, the one most influential to me being stained glass.  I had an idea of how to represent some of his stained glass work in Zurich onto my mannequin, thought I should review his other work too though.  I went to the college library and found a couple of books on him and reviewed his work scanning through the colour plates in the middle of the books.  I also found one of his works hangs here in the Museum of Fine Arts in Houston, which like most Houston museums, has a day of free admission.  I was able to go and take a closer look at one of his originals for more detailed reflection on his work

What struck me most on this review was the frequency in which bunches of flowers appear in his work.  Some, like the painting in the MFAH is named as such including the word ‘Roses’ in its title.  Many other bunches however are just randomly placed in paintings with no reference to why they are there in the overall theme of the painting or in its title.

I therefore decided to put my mannequin into a vase and be a bunch of flowers.  I also found some stick-on glass tiles which I added in reference to the stained glass work which first attracted me to the artist. 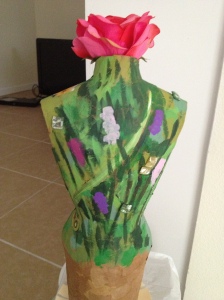 Any guesses as to which artist inspired me?